Laser soldering is currently gaining attention as a new soldering method. However, as this is a new industrial technique compared to iron tip soldering, the heating principles differ, and it cannot simply replace iron soldering.

Without understanding and properly utilising the technical characteristics of both laser and iron soldering, soldering stability and quality are unattainable. This article will explain the principles of laser soldering, as well as guidelines for its use.

The mechanism of laser heating

Laser heating differs from iron heating in that it is fundamentally a surface heating process, rather than a process of heat transfer. There are three basic steps in a soldering heating process: the first to preheat the soldering points, the second to apply heat in order to feed the solder, and the third to post-heat to set the shape. Both iron and laser soldering follow these steps, but the heat conversion process of the two methods is different. Understanding these differences is necessary in order to select the most appropriate method for required soldering outcomes. 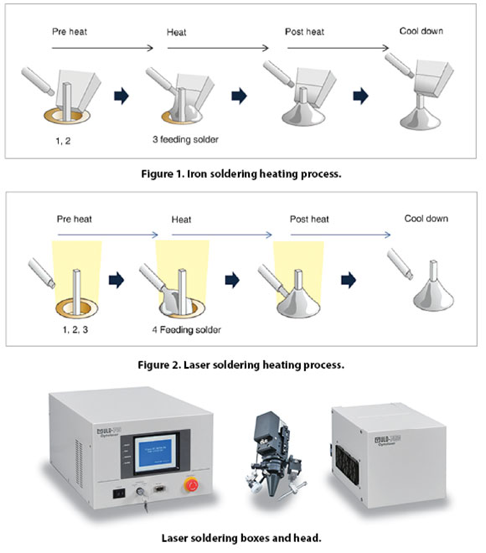 The iron soldering heating process, as illustrated in Figure 1, comprises the following steps:

On the other hand, laser soldering (Figure 2) works as follows:

In the iron soldering method, its heat is transferred through iron tips (heat transfer), while laser soldering produces heat on the applied points (surface heating).

Based on these methods, iron soldering does not heat over the set temperature in most cases, however if the iron continues to be applied, the surrounding area will heat up. In contrast, laser soldering heats the applicable area locally and the absorbed energy instantaneously raises its heat level. Thus, carelessness during laser soldering will quickly lead to overheating. As a result, to carry out laser soldering correctly, expertise and experience in both soldering and laser technology are required.

Consequences of temperature being too high or too low

In addition, the liquidity of flux changes based on temperature. For instance, when properly heated, the flux first flows into the soldered points and through-holes, removing dirt and oxides in the area and improving the soldering compatibility. In contrast, when overheated, solder moves into through-holes and stops flux flow. Furthermore, overheating easily damages circuit boards, leaving cracks on the inside.

Nowadays there is an interest in moving from iron soldering to laser soldering, simply because of its technological benefits as well as little required maintenance. However, without understanding the laser’s distinct characteristics for soldering applications, its potential advantages can be wasted.

Laser soldering can be a very useful technology for operations which are difficult or impossible with iron tip soldering, so long as the heating conditions are carefully set in advance.

The main advantage of laser soldering is its non-contact action – it has no contact with the circuit board or electronic parts, so soldering is accomplished without any physical damage. Efficient and pinpoint heating is another advantage which is applicable for narrow and tight places. Furthermore, it needs less consumable materials such as iron tips, which significantly reduces daily maintenance workload.

On the other hand, highly reflective materials make it difficult for a laser to apply heat to the target, and in such a case the heat transfer mechanism of iron soldering is preferable.

After successful commercialisation, laser soldering equipment has been adopted by electronics manufacturers of smartphones, medical devices, and many others. Throughout the uptake of the technology, the soldering laboratory at Japan Unix has been collecting data on safety, reliability and fusion strength through actual inspections and evaluations, and the value of adopting laser soldering continues to be demonstrated.