Soldering in a nitrogen atmosphere has increased in popularity in recent years, owing largely to the ongoing miniaturisation of assemblies, the resulting tightening of pad and conductor pitches, and requirements for high-quality solder connections.

Other factors include higher process temperatures in lead-free applications, increased risk of oxidation as well as environmental issues. All of these issues are mitigated when using inert atmosphere since cleaning of solder and flux residues from printed circuit boards (PCB) can be avoided.

Several issues must be considered when deciding on the use of inert gas. While at first sight the cost of inert gas may seem to raise total production costs, it also has to be taken into account that the quality of solder connections will be improved remarkably if the soldering process is performed in an oxygen-deficient environment. This enables cost reduction on repair/rework, thus benefitting overall profitability.

Inert gases are used to avoid unwanted reactions with atmospheric oxygen, which primarily results in oxidation of metal surfaces. Nitrogen is the main ingredient of air with 78.08 vol%. For the extraction of nitrogen by air fractionation the industry makes use of the different boiling temperatures of the air components. Air is liquefied by cooling it down and then its constituent elements are obtained by fractional distillation.

As an alternative to conventional liquid gas supply, nitrogen generators can be used which are able to produce purities from class 2.5 to class 5.0. Basically these generators use compressed air that is guided through a carbon molecular sieve. While oxygen molecules and other air components are absorbed, nitrogen molecules (the desired product) pass through and are collected in a tank.

Of course, such generators offer independence from nitrogen suppliers, and to a certain degree also offer a cost advantage. This, however, strongly depends on the nitrogen quality and quantity. As a rule of a thumb, it is assumed that self-production of nitrogen with a generator loses its cost effectiveness when the required purity is higher than class 4.5 and if more than 10 m³/h are needed.

Effects of nitrogen on soldering

Nitrogen undergoes an inert reaction due to the ternary covalent bonding between the two nitrogen atoms, and is used to displace oxygen from the soldering process. The resulting prevention of oxidation has a direct influence on solder spread, wetting force and angle, as well as on surface tension.

Although this effect is not as strong for lead-free solder alloys, a similar trend can be observed. Thus, it can be concluded that an atmosphere low in rest oxygen has a positive effect on solder spread. The wetting behaviour of molten solder is decisive for its spread on the surfaces and how it connects with them. Therefore, it is the determining factor for quality and form of a solder joint. Particularly in the case of lead-free solder alloys, the use of nitrogen might be recommendable as Sn/Ag/Cu solder alloys typically show poor wetting characteristics.

In addition, an inert atmosphere has a positive influence on the flow properties of solder due to the reduced surface tension. As for wave soldering processes, this effect can be observed when watching the flowing wave. The desired flow pattern can be easily recognised in a good nitrogen atmosphere and the nozzle plate remains without solder adhesions after turning off the wave.

The effects of a nitrogen atmosphere as described above apply for both wave soldering processes and reflow applications. They are, in fact, the basis for the larger process window that is often quoted. This means that the process in nitrogen atmosphere is more forgiving and variable quality of the material used in the process does show a lower impact on the soldering results.

Basically, assemblies which were soldered in a nitrogen atmosphere have a cleaner appearance since low activated solder pastes can be used. Therefore, additional cleaning processes are usually not necessary. The most obvious advantage of reflow processes in nitrogen atmosphere is the reduction of defect levels, particularly when processing fine-pitch components or BGAs. 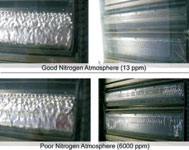 Due to the improved wetting activity and lower surface tension, defects such as cold solder joints or non-wetted joints can be reduced significantly in a nitrogen atmosphere. The head-in-pillow defect is a typical example: here, the solder paste depot as well as the BGA ball have been fully melted, yet a metallurgical connection cannot be formed.

This defect often cannot be detected with common test equipment and causes problems when the device is in use. A main reason for the head-in-pillow effect is excess oxidation, either at the BGA ball or at the surface of the solder paste depot due to ‘bleeding’ flux.

On the other hand, nitrogen can promote a tombstone effect, particularly when processing two-terminal components. Because of asymmetric paste printing or component placement, the two solder paste depots melt at different rates. The wetting force of the solder depot that is molten first is sufficient to draw up the component. As nitrogen improves the wetting force remarkably, this effect is intensified.

This phenomenon may be counteracted by reducing the temperature gradient while the solder transforms from the solid to liquid phase, or by adapting the printing process such as using home plates.

The positive influence of a nitrogen atmosphere on solder joint quality has also been proven in different reliability studies and shear force examinations.

There are different options to make use of an inert atmosphere in wave soldering processes. A common and reasonable way is a partial gas treatment (nitrogen hood or similar) that only inerts the solder wave area. More effective (and also more expensive in terms of capital investment) are tunnel systems which operate with an adjustable rest oxygen level between 20 ppm and 500 ppm in the soldering area, and additionally build up an inert atmosphere in the preheat and cooling area.

In principle, compared to reflow soldering processes there is an obvious, visible appearance of oxidation on the large hot surface of the solder in the pot. This dross needs to be removed regularly and has to be replaced with new solder alloy. As a rule of a thumb, the oxidation speed doubles with every 10 K of temperature raise.

One electronics manufacturer working in a three-shift operation using both machine types in production, examined and documented the dross appearance over one year. The calculation they performed considers the price for solder alloy as well as refund prices for dross.

Since drossing is reduced in an oxygen-deficient environment, the duration of required maintenance work is shortened, resulting in improved machine availability. In the example above, the weekly maintenance was reduced from 7,5 hours for the partially inerted machine to only 1,1 hours for the tunnel machine.

If reduction of dross is the main criterion, rest oxygen values of about 1000 ppm and therefore local inertion are sufficient. However, if all advantages of a nitrogen wave soldering process are to be employed, a rest oxygen level <500 ppm needs to be established. This can only be achieved with a tunnel wave soldering system.
The main task of flux during the process is to remove oxide and polymer layers from the metal surfaces and to protect them against re-oxidation. Most fluxes are washed off when passing the first solder wave. The solder joint, however, is formed directly after passing the second solder wave and the peel-off behaviour is decisive for its shape. Therefore, it is advantageous to work in an environment that is free from oxides.

Due to the inert conditions, aggressive fluxes and additional cleaning processes are not necessary. Moreover, wetting activity is improved and re-oxidation effectively avoided. Thus, the quantity of flux that was meant to remove metal oxides in an ambient atmosphere can be cut in a nitrogen atmosphere.

Considering all relevant parameters such as layout, temperature profile or solderability of the used materials, the defect rate can also be remarkably reduced when soldering in a nitrogen atmosphere. This is mainly because of the improved wetting characteristics and the changing surface tension of the liquid solder which occur in a nitrogen environment. A very positive influence can be observed for typical soldering defects such as incomplete through-hole penetration or insufficient wetting, as well as for bridging and solder balls.

The total production costs in a nitrogen atmosphere, when taking into account the cost of nitrogen gas against the cost savings, were found to be more than 120 000 Euros less over one year than a tunnel system. In comparison to wave soldering machines operating in ambient atmosphere, the cost savings would be even greater.

In principle, the same considerations apply for selective wave soldering processes as for conventional wave soldering. Using nitrogen positively affects the flow properties of the liquid solder alloy. While the miniwave in a nitrogen environment shows a controlled solder flow, the liquid solder rapidly oxidises as soon as the inert atmosphere is lost. The solder flow can then be deflected easily and can hardly be controlled, which makes it difficult to produce reliable solder connections. Formation of dross and the required flux quantity are also reduced in selective wave soldering processes.

Since oxidation is successfully avoided, of course, the lifetime of the solder nozzles is extended tremendously, which reduces maintenance on the one hand and generally allows serial production on the other hand. Due to the comparatively small solder volume that is available for energy transfer, selective soldering processes use remarkably higher solder pot temperatures – up to 320°C. This, of course, goes along with an increased risk of oxidation.

For these reasons, selective soldering systems are generally operated in a nitrogen atmosphere. However, selective systems typically work with minimal nitrogen consumption. Thus, the related costs are reasonable.

Whether nitrogen is used or not really depends on the application, the materials used and the products that are manufactured. An insufficiently managed process will not turn into a perfect process just by adding nitrogen. However, an inert atmosphere can contribute to a larger process window.

While nitrogen adds cost on the one hand, this is offset not only by the long-term cost savings but also the higher quality and reliability of solder joints.